The photos above are ones I took of the now famous Kogi BBQ truck. The roving Korean BBQ taco truck beloved by LA hipsters, drunkards and foodies alike. But this entry is not about Kogi BBQ.

The evening these photos were taken my good friend Berit and I had gone to see Jason Luckett perform songs from his new album MMIX, at Genghis Cohen. But this entry is not about Jason, his considerable talent as a singer/songwriter or his outrageously curly hair.

After the show we decided to walk, window shop, then go for coffee. Somehow we ended up on the one street in West LA with no late night coffee house. Nothing was open not even a Starbucks. But this entry is not about coffee or the lack thereof.

I bemoaned not having an iPhone. If I had an iPhone we could locate a cool place and call to see if they’re open. Berit said “Then you’ll be like everyone else, Twittering all the time.”

Twitter you say? I then related a story about a meeting I had attended a few months back where the discussion was about new media platforms and how to use them to grow a client’s business. One woman said she didn’t really understand how Twitter could be used in marketing. Now I’m not much for speaking up in meetings but I volunteered what I’d heard about the Kogi BBQ truck. I said “because they are mobile and change locations frequently they use Twitter to let followers know where they are going to be on a real time basis.” Instead of people saying “Wow that’s interesting, thanks for sharing” my contribution to the discussion was met with laughter and questions like “Have you eaten there?” and “Do you like Korean food?” Well what was I expecting? I’m an artist Jim, not a marketing genius.

Berit wondered if perhaps I’d not expressed myself clearly. It’s true, I am terrible at public speaking but I’d thought since the subject of the meeting had been new media platforms and not food… It was a little more than a month after that meeting that Twitter co-founder Evan Williams, gave a TED talk about companies who had successfully used Tweets in marketing their business. One example he cited was…uh huh… KOGI BBQ. Maybe this post is just about my infantile need to say “told ya so.”

Or maybe I’ve fooled you and this post is really all about the Kogi. 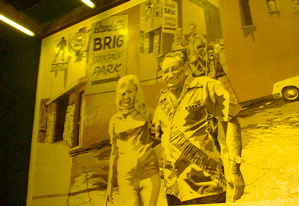 Still looking for coffee as we drove on and talked. We took La Brea to Venice. Then ended up turning onto Abbot Kinney and there parked outside of The Brig… was the Kogi BBQ truck! It was magical. And so much fun, the long line was like a party. Everyone taking pictures of the truck, friends in front of the truck and the food. If you go to Flicker you’ll see how many photos of the Kogi BBQ truck have been posted – it’s incredible.

We each ordered one taco.
Berit had tofu, I had beef.
They were delicious!

I fell in love with a boy because he was wearing a button that read ‘Fuck This Shit’. It was High School English Lit. class, 6th period. Our instructor took the sentiment personally and ripped the button from his shirt. This boy and I had been *just friends* up until that day but after that I was definitely crushing on him. Okay, he was tall and had a pair of devastatingly blue eyes but it was the rebel thing that really did it for me.

High School is now long since past and my figurative love vs. hate knuckle tattoos have faded into memory. Or have they? A few weeks ago I went to hear a Ska band. I know what you’re thinking. Pork pie hats, skinny ties and dark suits, me too. We would both be wrong. These were kids. Punks. Beautiful punk kids! Only a true case of arrested development such as myself would find teenagers furiously moshing, stage diving or passed out so endearing. I loved the club, the music, the audience –
I loved it all.

Since that show I’ve been asking myself, why do I feel so at home in places like this club? Amongst a congregation of the disaffected. Surely I should feel lucky. I have a career, a great family, some money saved and good friends. I am a woman and I am free to go where I want, do as I please. I live in Southern California a veritable playground from the desert to the sea. It is the land of plenty and convenience. On most days it’s a cozy enclave of diversity and acceptance. The legendary Lotus Land. Still, I wake up most mornings thinking ‘is this all there is?’. Maybe you do too.

It’s in me. My DNA. Van Morrison has a song Melancholia. In it he sings about melancholy as a condition. Not just a passing emotion to be cured or gotten over but a state of being. Not seriously depressed or mentally ill, just an enduring sadness with an undertone of angst. So many years I’ve hidden these feelings. Put on a happy face! Growing up I was made to feel wrong, even guilty about feeling blue.

Now I’ve made the decision to embrace my melancholy and disaffected angst.
Ha! Maybe I’ll even revel in it. So thanks kids, you’re alright! 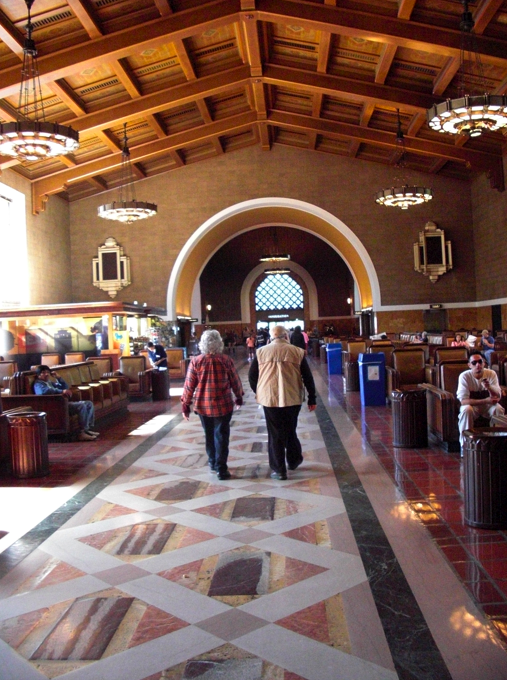 I took this photo on a trip to the Golden Dragon Parade in LA’s Chinatown. This was among the first digital photos I’ve taken with my Casio Exilm EX-S10. It is not a professional camera but it takes nice photos, short movies is tiny and fun to use. This was also among the first photos I’ve uploaded to Flicker. The other day I got an email from Schmap saying this photo had made the ‘short list’ for photos of Union Station to be used in their Los Angeles Guide, publishing in late March 2009. No money, but a photo credit and link to my Flicker site! I hope they do use it, Union Station is one of my favorite places in LA and perhaps my love of this beautiful historic building comes through in the photo.

Update! The photo is up here http://tinyurl.com/cjndy6